The Sheerness of Burberry Brit

I'm feeling fabulous!  Why?  Let me tell you: while I was buying a pair of awesome shoes I noted that there was a free perfume sample at the counter which was mine for the taking!  Shoes and perfume? How could the day get any better?! 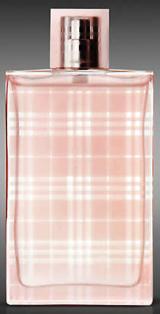 Launched in 2007 as a limited edition, and brought back to shelves in 2010, Burberry Brit Sheer entered the flanker scene to what appears to be neutral reviews.  (Should you want to peruse them yourself, you can check them out at Basenotes, Fragrantica and Osmoz.)  But, what do we think about it here at Scents n Scentsibility in 2012?


I've just tested it and Wow!  The top notes are very fresh and clean.  There are light citral-soapy notes that warm into a very slightly powdery floral with the tiniest hint of marine way at the back.  The musk of the dry down makes the fragrance heavier than when first sprayed, but the bright floral notes remain to lighten it and keep it smelling fresh.


This is definitely a fragrance you'll want to have at the ready when spring arrives, the sun comes out and the flowers start to bloom ... put this fragrance on and and you'll be springing and blooming as you step out into that gorgeous spring day!

I'll keep this one short and sweet because there isn't much time left to choose your scent before the love-infested holiday that is Valentine's Day.

For this most-romantic of holidays I've decided to visit L'Occitane, for who wouldn't know better about l'amour than les français with their language of love?  Mais oui!

L'Occitane has created a Limited Edition flanker based off of their popular Cherry Blossom Eau de Toilette scent.  Which, BTW, I smelled while in store and although some people call it delicate and romantic, I call it a pretty mediocre floral that is not very strong and also does not last very long.  I mean, it all but disappeared from my scent strip within five minutes of spraying it!  But I digress...

Cherry Princess Eau de Toilette was a completely different experience.  It was vibrant and fresh with top notes of grapefruit and berry, and soft floral notes of violet and magnolia underneath.  It is a linear fragrance, so does not change as it dries down and unlike its parent Cherry Blossom, its scent stays strong and has a long lifetime on the skin.

The very helpful sales person in the store informed me that Cherry Princess EDT is indeed a limited edition and would be leaving the shelves after Valentine's Day ... so you better hurry out to pick some up, if not only so that you have something to scent-ccessorize with tomorrow for Valentine's Day!!

PS - if you miss out on Cherry Princess EDT you could find a very similar fragrance in Moschino's Hippy Fizz!

A new personal care product has been popping up on shelves in local stores.  Have you spotted it?  It's bright and feel good-y, and it also has a smile built into its name:

Burt's Bees has deviated from their traditionally clean, neutral and simplistic package designs and has opted for a cutesy artistic look à la Eric Carle and bright, happy colors like pink and orange.  Continuing along the cutesy theme, they've named the variants Floral Cherrynova, Orange Petalooza  and  Vanilla Flame.  (Are you smiling yet?)

Their goal with all of this is no doubt to extend their brand to a younger consumer, but one that is still concerned about natural ingredients and potentially harmful chemicals (güd advertises on its packaging that it has no parabens, phthalates or petrochemicals).  (You smiling now?)

In a final blast of cutesiness and feel-goodness, güd strives to make you (and those around you) smile with their 'newtastic'* , 'smelltastic' scents.

So, since I've got my hands on this new product, am I smiling?  I was in a fruity mood while at the store so I picked up the previously mentioned Orange Petalooza body wash and the unmentioned Pearanormal Activity, which doesn't appear on the güd website.  Must be an exclusive to Target! 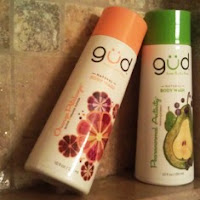 My first impression of Orange Petalooza: Blood Orange Flower is orange popsicle - sweet and tart and oh, so yummy!  In use, the dynamics of the scent change.  It becomes more sophisticated and although it is still sweet in the top notes it is weighed down with white floral notes and a tiny bit of musk right at the bottom as well.  This makes it a much more 'adult' fragrance.  The bottle claims that 'if you don't sing in the shower, you will now', and I'm definitely singing!
Now to what appears to be a Target exclusive: Pearanormal Activity: Pear & Açaí Berry body wash.  In  its neat form this scent is definitely not as strong as the Orange Petalooza.  It has sweet top notes that are barely recognizable as either pear or berry and warm gourmand, slightly vanilla-y undertones.  In use the fragrance continues to lack strength, but has a mild and pleasant sweet-berry-gourmand scent.  The bottle claims that 'it's like an invigorating towel snap. Without the sting.'  I say, what towel snap - I didn't feel a thing! ...and maybe this is why  Pearanormal Activity is missing from the güd website!

In any case, I am giving the thumbs up to Burt's Bees and güd.  I like the packaging, the variant names are fun and even though Pearanormal Activity wasn't that great, Orange Petalooza definitely makes up for it!!

*on a side note, did the marketers on the güd team at Burt's Bees have a loss of creativity?

Leave a comment -what do you think?  Can you suggest something better?
Posted by Mrs. Scents at 12:37 PM 4 comments:


There's Coco Lobo, Jungle Kiss, White Palm (which I am told is the best seller so far), Mango Beachwood ... and the list goes on and on !  You can check out the full product line here.  There was no way I was going to be able to evaluate all eighteen of the tropics candle line, so I settled on the one that I thought smelled the most interesting, even if it was a relaunch from last year: Tropical Spice.

When I was in the store I couldn't believe the cold throw the candle had!  Was it really a mix of coconut and vanilla and a huge slug of CINNAMON?  I had to get it home to check it out.  Once I did, though, and my nose cleared from smelling the many different variants in the store, I realized I was wrong!

My nose had been polluted by all of the other scents wafting around me!  Home and in a fragrantless environment, the cold throw showed its true colors.  Vanilla and cinnamon.  No coconut whatsoever, that must've been from another candle.  Talk about disappointing!  Five bucks says they've just taken one of their seasonal holiday scents and reconceptualized it (new wax color, new name, new label, old scent).  Oh well and ho-hum, life goes on!

I still pursued the smelling of the candle, even though I was disappointed by the uninteresting cold throw of vanilla, cinnamon and a tiny bit of sweet-bubble gum at the back (which keeps it from smelling Christmas-y).

There isn't too much to report on the hot throw.  It was a vanilla-cinnamon scent that struggled to over power the scent of wax when burned for over an hour.  Common and boring - I was so wrong when I picked it up in the store!  Such is life, I guess, good thing I was less disappointed with the other candle I bought.

Launched at the same time as the tropical line is BBW's more floral themed line of candles.  These variants include Lilac Blossom, Flower Shop, First Bloom, Spring and a few others.  I picked up Green Grass, which is a new launch this season. 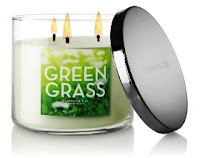 The cold throw is a very green fragrance with hints of dry grass under a fresh watery cucumber with aspects of clean white floral.  Very pleasant indeed.  The hot throw is linear and scented the room with clean, bright cucumber and grassy-green scents.  This candle was definitely better formulated than the Tropical Spice, as was proven by its superior hot throw.

Assessment? Green Grass is definitely preferred to Tropical Spice, but if neither take your fancy, don't worry - there is no need to decide between these two!  There are still twenty-three other newly launched/re-launched candles to choose from!  Go get smelling!
Posted by Mrs. Scents at 9:43 AM No comments:

Fragrance Lover? Check out the below!