Unbelievable.  I just decided on what air freshener to fragrance my home with this Fall and then I receive the news that Yankee Candle has their Holiday Fragrances out.  No rest for the weary, I tell you!

But they have also launched three new variants, and I've got my hands on them for your smelling pleasure.

Let's begin with Cherries on Snow.  Firstly, the variant name.  Truthfully, and I don't know about you, but I don't associate cherries with winter and I have definitely never seen them on snow.  Maybe 'Clementines & Snow', or 'Winter Pomegranate' would have been more appropriate - what do you think?  Please, comment below!  Anyway, let's put Yankee Candle's attempt to creatively expand their range to the side, and look at the fragrance.

When I picked this up in the store it smelled so wonderfully of sweet cherry candy, but when I unwrapped the candle at home to properly assess the cold throw I was disappointed.  It smelled exactly like a Strawberry Shortcake Doll - a light sweet berry scent mixed with plastic.  Disappointingly, yet unsurprisingly at the same time, the hot throw was not very impressive either.  The Strawberry Shortcake Doll smell pervaded my testing area with no traces of the sweet cherry candy scent that I experienced in the store.  Thumbs down on this one.

Mountain Berry is next up and thankfully this one wasn't a let down.  The cold throw is a menthol-y evergreen invoking scent that pleasantly tingles the nose with its freshness.  It didn't change much in hot throw either.  The scent was still strong and evergreen, but had lost the hints of menthol that were in the cold throw.  Very pleasant.  One last thought, and I am not sure if many of you will know this association, but this fragrance immediately reminded me of the Original Spring Green variant of Vitabath from the 1980s (a favorite around my grandparents' house).

The last new launch from Yankee Candle for this holiday season is Christmas Rose.  Out of the three scents this had the strongest and most overbearing cold throw.  Like the Mountain Berries, nothing much changed at all with the hot throw.  It was still strong, overbearing and a linear rose scent.  If you like roses, you shouldn't miss out on this one!

So, there you go.  Yankee Candle's three new launches for this holiday season.  And just in time, too - I mean, it's nearly November for goodness sake!

October has arrived and with it colorful leaves, pumpkins, cool weather and the horribly difficult decision of which brand's apple & cinnamon scent to fragrance your home with this Fall.

Today I have decided to stick to the basics and, to help you make an informed decision on your Fall fragrance, I visited my local Target and purchased the standard variant in candle format from each of the main brands. 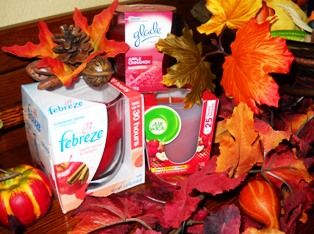 Glade's Apple Cinnamon's cold throw is moderate with a delicately sweet scent of red apple flesh (not skin).  There are little, if no, traces of spice in the scent.


In use, the fragrance was, unfortunately, a disappointment.  There was a tiny whiff of apples, but it was completely overtaken by the scent of wax.


In use, the hot throw lacked the intensity of the cold throw.  The room was left lightly fragranced with very soft notes of apple that intertwined with, and softened, the previously overwhelming cinnamon scent.


Sadly, I was let down by the mediocre hot throw of this candle.  The room was filled with the subtle scent of red apple skins mixed with wax and a dash of cinnamon.

***
With the three candles assessed, it is time for conclusions...


Air Wick Apple & Shimmering Spice is moderately priced, but its cold throw was almost offensive in the strength of the cinnamon, although it did mellow out in use.


Febreze Apple Spice & Delight is the most expensive of the three with the best and most pleasant cold throw, but also the most disappointing hot throw.


Thus, the ultimate debate on affordable Fall scents is now over with Air Wick and Febreze tying for first place, leaving Glade trailing behind and left lonely on the store shelf!
Posted by Mrs. Scents at 3:22 PM 1 comment:

Fragrance Lover? Check out the below!